2017 season is full of special days, sparkling nights & so much more! 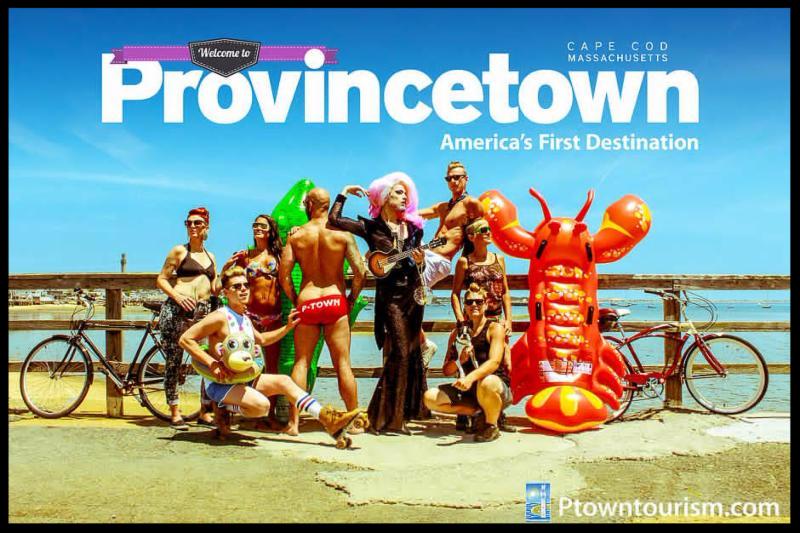 Provincetown is where hospitality, culture and commerce flourish along with a freedom of expression found only at the tip of Cape Cod, especially in times of uncertainty. Our exciting blend of fine shops, outstanding restaurants, entertainment venues and quality accommodations are set in a backdrop of incomparable beaches and a vibrant harbor, inviting visitors to enjoy America’s First Destination all year long.

From fireworks and parades to Bear Week and Girl Splash, The 2017 Calendar Of Events showcases the best of Provincetown with something special every month of the year. Chase off the winter chill on Snowbound Leather Weekend or celebrate with neighbors at the Year-Rounders’ Festival at Town Hall.

Welcome the whales with the launch of the Whale Watch season in April and explore history, culture & heritage when the Pilgrim Monument and Provincetown Museum reopens for the season on April 1st. Need a lift? Fast Ferry service begins in May with daily 90-minute trips from Boston. June starts off celebrations of diversity with Women of Color Weekend, WorldFest Cultural Festival and The Provincetown International Film Festival brings Hollywood to town. The Provincetown Portuguese Festival & Blessing of the Fleet, now in its 70th year, is one of the Cape’s most popular events.

Independence Week in July is always a hit, featuring a July 4th parade down well-known Commercial Street and fireworks from MacMillan Pier. Family Week, one of the largest gatherings of its kind in the world, and the Gay Athalon Games close out the month. August really swings with the Provincetown Jazz Festival and the legendary Carnival Week & Parade, now in its 39th year, will unveil hundreds of “Gods & Goddesses.”

Provincetown moves towards fall with the Great Provincetown Schooner Regatta and the 30th Annual Swim For Life & Paddler Flotilla. Afterglow – Alternative Performance Arts Festival honors Provincetown as the birthplace of Modern American Theater while the Tennessee Williams Theater Festival continues the tradition of theater in Provincetown. Ballroom dancers from around the world will compete for the coveted Provincetown Dance Trophy.

October is a mix of art, women and fantasy with the annual PAAM Gala kicking off the month. Women’s Week is soon after with over 150 different events for every taste. Up next? Fantasia Fair, now in its 43rd year, the longest standing transgender fair in the country, is followed by Halloween Weekend with a ball at Town Hall, costumes and cavorting that has to be seen!

As the calendar winds down the events keep coming! The Lighting of the Pilgrim Monument the day before Thanksgiving and the lighting of the Lobster Pot Tree at Lopes Square soon after have become holiday traditions. Holly Folly Stroll has lots in store for the holidays and the Outer Cape Chorale Concert fills the air with sounds of the season. And Provincetown sends out the old and brings in the New Year with First Light Provincetown Weekend & Fireworks!

Steeped in history, culture, cuisine and artisans, Provincetown is a cornerstone of inclusion and worthy of the title: America’s First Destination. For the full lineup of events for 2017 please visit Provincetown Tourism on the web at ptowntourism.com/events.

Some highlights of the 2017 Season:

November 22: Lighting of the Pilgrim Monument

in About Provincetown, News from the Tourism Office /by lduarte