« The ocean, the most beautiful and diverse of primitive voices, it’s a mistake to talk about the monotony of the ocean…The sea has multiple voices. Listen to the surf, really lend it your ears, and you will hear in it a world of sounds: hollow boomings and heavy roarings, great watery tumblings and tramplings, long hissing seethes, sharp, rifle-shot reports, splashes, whispers, the grinding undertone of stones, and sometimes vocal sounds that might be the half-heard talk of people in the sea. And not only the great variety of sound that elements compose it, but also the constant change in movement, tone, accent and rhythm, sometimes strong and deafening, sometimes almost placid, sometimes almost furious, sometimes serious, sometimes a solemn slowness, just now these are some isolated notes, an animated rhyme of a monstrous tenacity, a persistence of a primitive force. All the moods of the wind, all the variation in weather throughout the course of a day, all the phases of the tides pull on the sea with their particular and subtle musicality” – Henry Beston, The Outermost House

Whatever your mood, Provincetown has a beach just for you.

The Cape Cod bay is less cold than the Atlantic, where one can find few algae and waves. (Ces) The beaches border each side of Commercial Street: on the bay side, the East End beach and West End beach are very tranquil, ideal for canoe trips and paddle boarding. Benefiting from the large and long tides, these beaches extend out to infinity. At the sea bottom, they are covered in tide pools, abundant with miniature marine life waiting to be discovered. The bay side beaches are very family friendly. Near the center of town, Harbor Beach is found near the wharf; car owners can park right on MacMillan Wharf Warf.

The Province Lands are peppered with several pedestrian and bike paths, and of course the idyllic beaches that border each side of this protected area! This landscape of dunes is particularly enchanting.

Herring Cove Beach and Race Point Beach are both under the protection of the Cape Cod National Seashore, and for good reason: they are magnificent. The beaches welcome surfers and other board sports amateurs (like windsurfers) because the waves from the Atlantic Ocean can unfurl quite dramatically on the coastline.

Herring Cove is found at the tip of Provincetown and is great for its parking lot directly by the beach, where you can also find restrooms and classic American beach food.  Google Map for Herring Cove Beach

Race Point Beach will be a perfect choice for people looking to get a summer glow – being almost situated towards the North, this beach remains covered in sunlight all day and it’s not rare to see seals here, or even whales, when they approach the coast! The beach is found at the end of Route 6. Google Map  for Race Point Beach

Looking for solitude? Long Point Beach, at the absolute point of the Cape where you can pay a visit to Long Point lighthouse – will offer you the most tranquility of all beaches. Access to the beach is best by a « boat bus » from Flyer’s Rentals or by foot, by crossing the breakwater at the very end of Commercial Street. (http://www.flyersrentals.com/lpshuttle.htm) 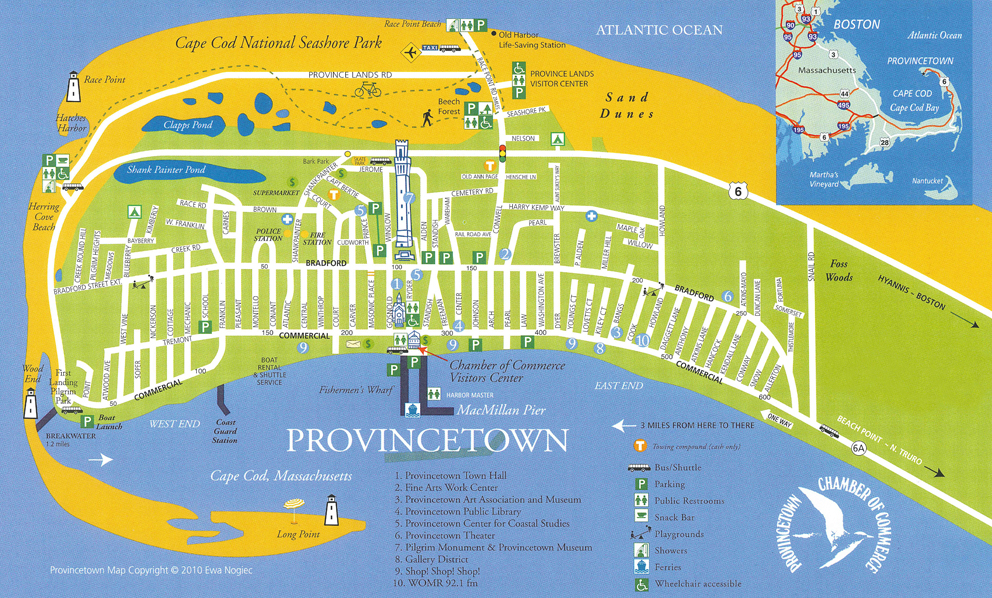