Letter from Provincetown, may 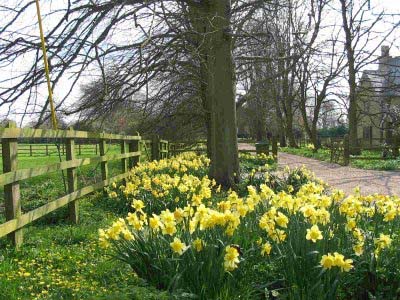 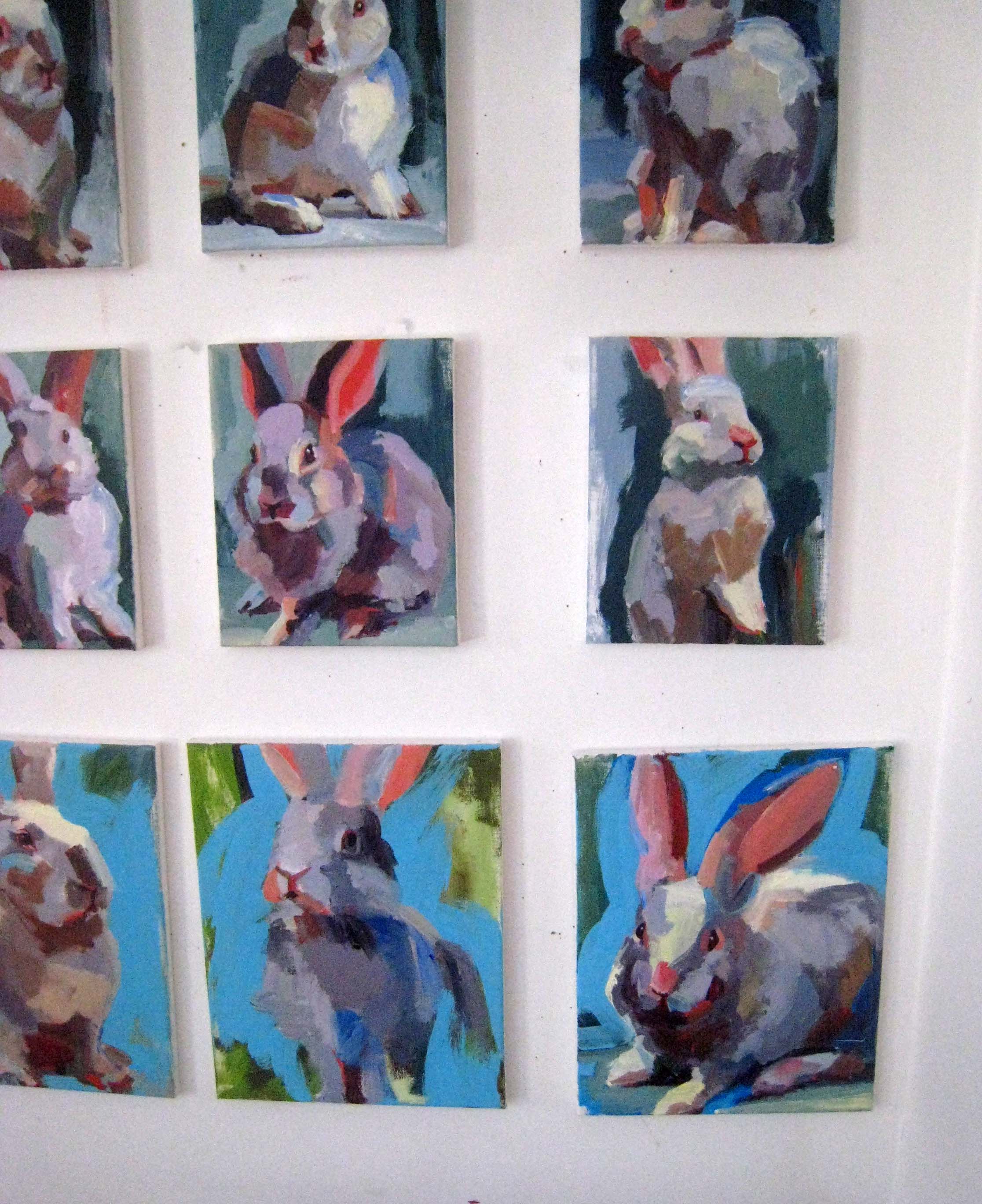 Spring is starting to unfold here on Gay Olde Cape Cod. Like a Lady of old she bestowes beauty where ever she goes. It is a time of changes small and BIG; transformation seems to be the theme that is whirling around in my brain these days while tooling about this Gay Olde Towne. Recently I stopped my rusty old boneshaker when I espied with my roving eve the painter Jo Hay tending her garden ,on a Spring like day. Jo is English,and has lovely and gracious manners some of us adore. However it was her studio that intriuged me most.She has works in a dream of a space- a separate building with good light and wonderful energy.Being nosey,I had to find out just what it was that made her change from a rather prestigous life and career in Graphic Design, to come and work in this place we call home. 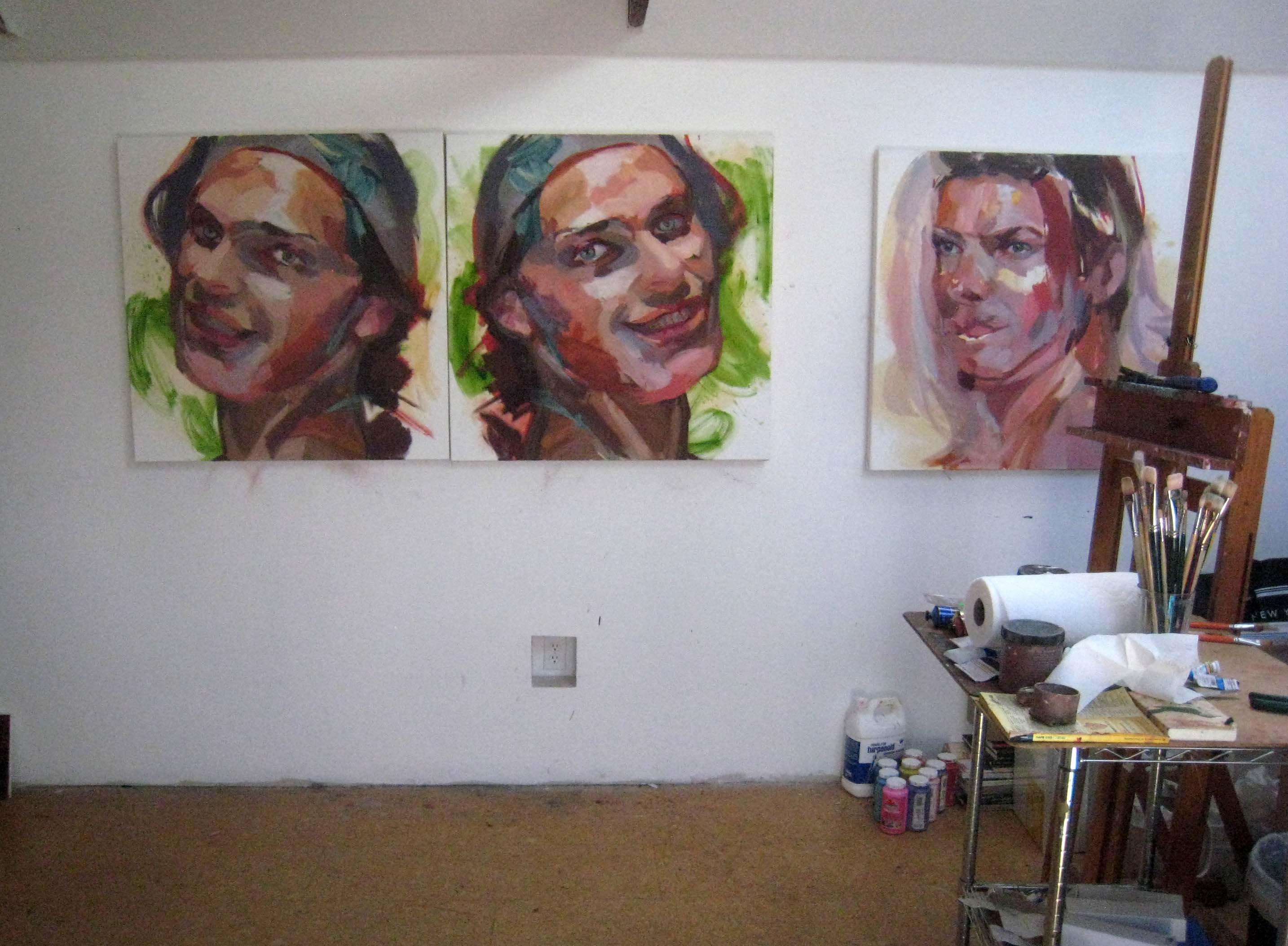 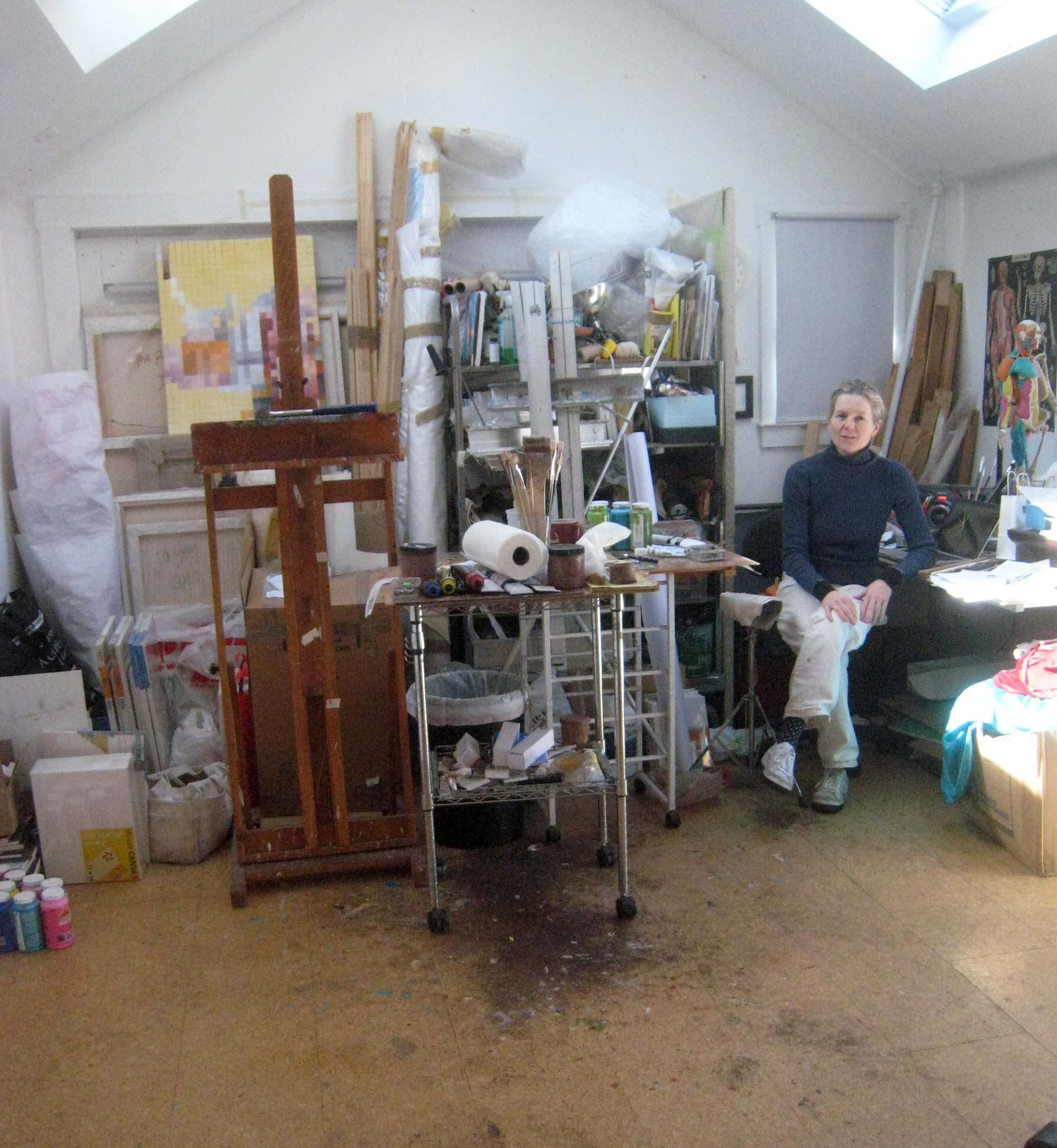 Painting for some is a gift,for others it is work and I think for Jo it is a life long quest. Born in Newcastle Upon Tyne,England in the 60’s,painting even as a child. Her fascination with color was the catalyst that made her pursue a career in Art. Having acquired a solid professional background in magazine design, Hay moved from London to New York City. While working in the design biz she attended classes at the Art Students League of New York. In the early 2000s she left Graphic Art designing to dedicate herself to painting full time. While living and painting in Greenwich Village she became aware of the obvious presence of androgyny represented by the transsexuals, transvestites, and transgendered men and women.Fascinated by the mysterious middle ground between the sexes,she began to probe the psychological and sexual perceptions of gender through her work. Hay’s work has been included in various group and juried shows,her most recent solo exhibition entitled “Betwixt” a series of large scaled heads that appeared to be male and female simultaneously.She explained that the series of paintings are not portraits of specific people,but are pieced together from photographs, paintings and life.She strives to make dynamic compositions with overlapping brushstrokes that weave together creating a strong anatomical forms. The patchwork nature of these compositions allows her to push some of the painting towards the abstract. Making the structure dissolve and resolve with the question of gender .Not surprisingly in November 2013 one of Hay’s recent works from the “Betwixt” series was selected as a finalist in Madonna’s “ARTFORFREEDOM” competition ( http://madonna.tumblr.com/page/2) a global initiative encouraging creative expression that bringing awareness to human rights violations. 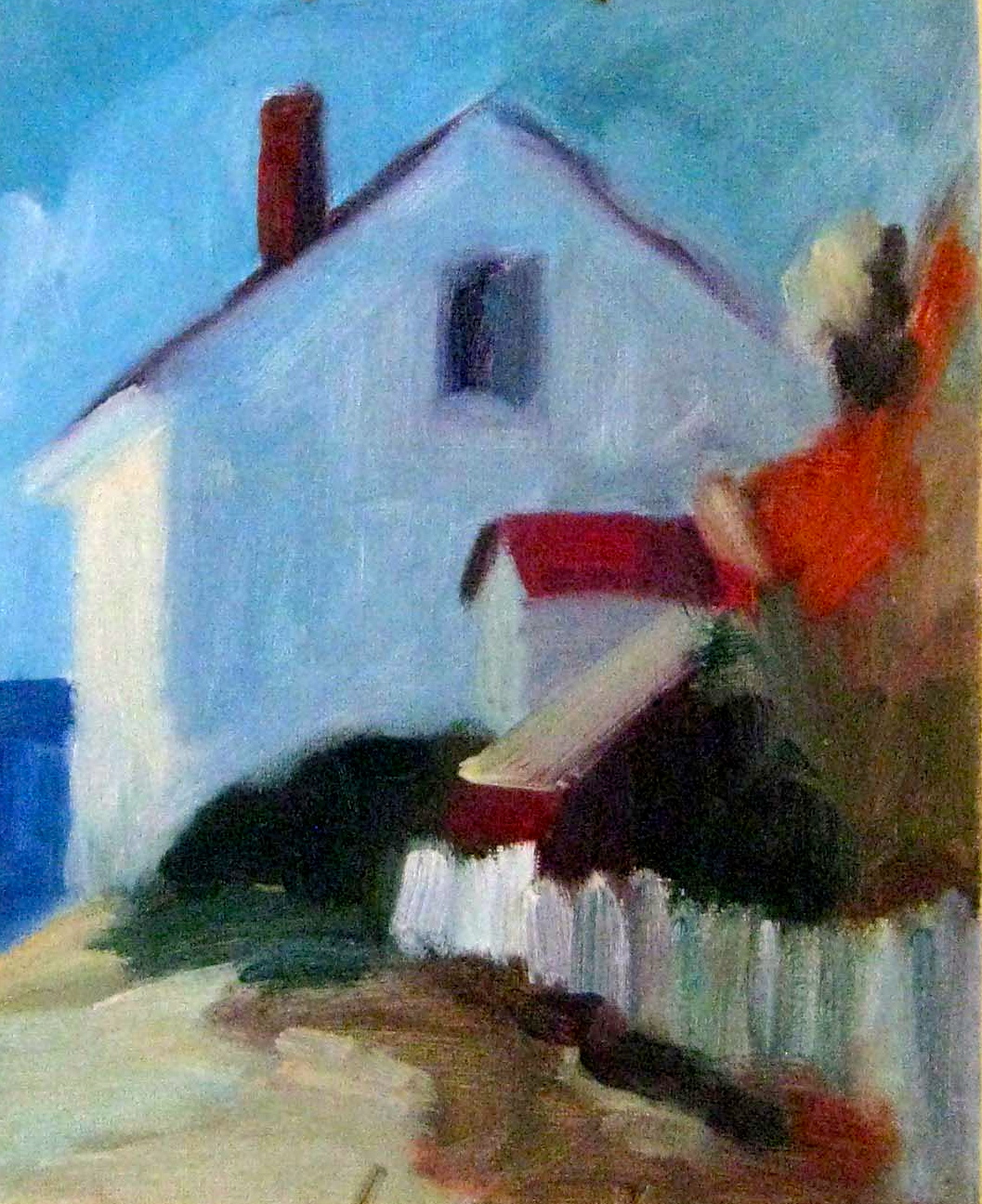 As the late afternoon light was boucning off the various planes and angles of paintings finished and not quite finished in her studio, we chatted like magpies about many things…life,gender issues and Provincetown. Nearly teatime she invited me to tea in the charming ,rambling and colorful (why did that not surprise me too much)  old house she and her partner Carolyn Kramer share. Color and Art and Cups of good strong Tea …chatter about NYC days …lifes up’s and down’s, all the while my eyes were happily taking in the colors of each room surrounding us.More and more of her Artt flowed into my eyes including those amazing little bunnieportraits which drew me to her work and brought me here to this lovely afternoon. The future promisesto be just as colorful for this truly wonderful woman and her painting, there are new avenues to discover and many more ideas to study and expose to the rest of us. My hat is off to this genuinely creative painter who takes such care and thought with each and every flick and stroke of the brush. Find out more about whats going on in Jo Hay’s colorful world here: http://www.johay.org/ 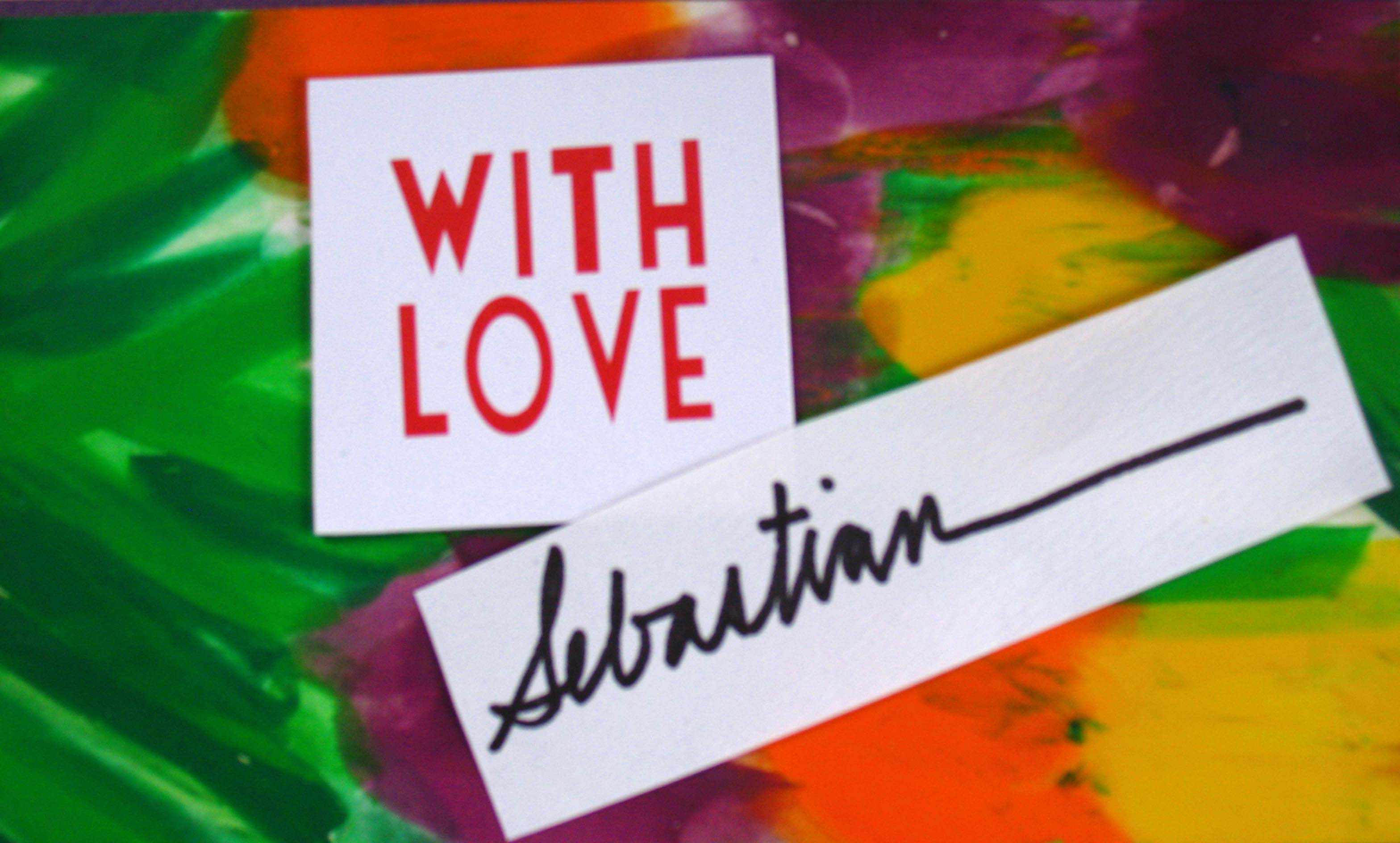