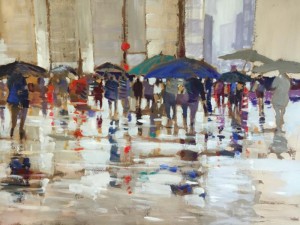 There will also be a toasting and meet & greet for Olivier Suire Verley at the French Cable Station Museum next door (41 South Orleans Road) from 4 to 5:00.

Olivier Suire Verley was born October 2, 1952 in La Rochelle (on the Atlantic coast of France) to a family of artists. His grandfather Louis Suire was a renowned painter (Oliver added his mother’s maiden name, Verley to his father’s name so as not to be confused with his grandfather, whom he cherished and admired) and his father Claude (now retired) was a publisher of art books and is an amateur painter himself.

Olivier studied in La Rochelle first, then in Tours. Moving to Paris, he also studied etching. Of a surrealistic tendency, the themes of his paintings of the time were based upon evasion from reality, fantastic travels and the sea. During that period, the colors in his palette were dark and melancholic.

1982 marked a profound change in Olivier’s inspiration: as by a refining process, it turned to become a quest for the essentiality in life, leading the artist to discover the salutary power of color. From that time onwards, his themes also changed; landscapes, still-lifes, portraits and again, the ever-present sea – the sea of Île de Ré – a small island off La Rochelle. He left Paris definitively and settled on that island, where he lives and works today.

Since then, his inspiration has drawn first from the colors of the holiday season in Île de Ré and on the Atlantic coast of France; then from those of Paris streets in winter or at night, and more recently from the light of Morocco and Spain. Today, Olivier seeks to meditate again on evasion, the elsewhere of our dreams, of our regrets sometimes, and of our hopes forever.

He shows throughout France, in China, Japan and, in the United States, exclusively at the Addison Art Gallery. His work is featured multiple books and films.

Helen and I have been working together for ten years now, at the rhythm of one one-man show every other year.  This is our tenth anniversary, our sixth show, and the twentieth anniversary of the Gallery. What a year!

My first inspiration remains the human being and its environment, its connivance; small scenes of life become exceptional if one knows how to pay attention to them. Fleeting lights and movement, dynamics, our hesitations that give a meaning to life.

Often my inspiration comes from situations, or occurs at totally unexpected moments. It’s like a thunderbolt. Nothing prepares you for it, there is no rule; a meeting, a conversation, a book, a landscape, a woman, or even a bit of nostalgia.

I love Helen Addison’s Gallery. The eclecticism of Helen’s choices, the friendliness of her collector friends, their loyalty and courage to open themselves to less conventional art forms.

I too live on an Atlantic island, Île de Ré; its charms, for those who know, could be confused with those of Cape Cod. Light, sand dunes, that “islander” character imposed on us by geography, that seafarers’ solidarity, and the endless sky that opens heart and mind.

The work has arrived from France and can be previewed at www.addisonart.com/olivier-suire-verley or in the gallery. For more information, please email or call 508.255.6200.

This station was the American termination point for a telegraph cable that came directly to Orleans from France. It was installed in the 1890s and was almost 3200 miles long. During World War I, General Pershing in France communicated with the US Government through this cable station. In 1927 the message that Charles Lindbergh had landed in Paris came through this station from Paris. It was then sent to the rest of the United States. Free guided tours are available of an historic collection of original Atlantic undersea telegraphic cables, instruments, maps, and assorted memorabilia. http://www.frenchcablestationmuseum.org

in About Provincetown, Arts, Cape Cod News /by lduarte 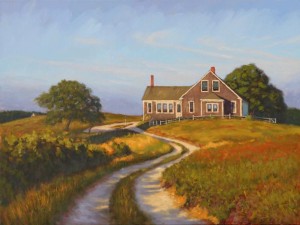 In 1934, the great American painter, Edward Hopper, built a home in Truro. “After Hopper” is a celebration of work by contemporary artists inspired by Edward Hopper and Cape Cod – the area that inspired him for decades. 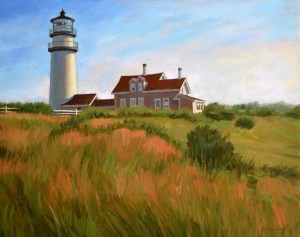 We hope you can join us at the Addison Art Gallery

The impact Hopper’s work has on contemporary artists and the market is rising with international coverage and soaring auction prices. Our region’s high regard for historic architecture combined with our natural environment (protected by the expansive Cape Cod National Seashore) makes this the ideal place for artists and art lovers to get a deeper understanding of Hopper’s work and influences. ‘After Hopper’ celebrates the integral part he has played in our country’s artistic heritage and the effects his work has on today’s painters.”

We invite you to preview the show at addisonart.com/afterhopper and in the Addison Art Gallery. 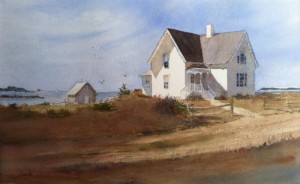 In 1930, Edward Hopper and his wife Jo spent their first summer in South Truro on Cape Cod in Massachusetts. Having traveled through the United States and France, they built their home here on a bluff overlooking Cape Cod Bay. Artists from across the country are joining with the Addison Art Gallery and other regional organizations and businesses for “After Hopper,” a celebration of work by contemporary artists inspired by Edward Hopper and Cape Cod – the area that inspired Hopper for decades. Plans for this celebration include exhibitions of new plein air and studio works, receptions, demonstrations, artist panels, and talks by Hopper experts.

Helen Addison of the Addison Art Gallery said, “The impact Hopper’s work has on contemporary artists and the market is rising with international coverage and soaring auction prices. Our region’s high regard for historic architecture combined with our natural environment (protected by the expansive Cape Cod National Seashore) makes this the ideal place for artists and art lovers to get a deeper understanding of Hopper’s work and influences. ‘After Hopper’ celebrates the integral part he has played in our country’s artistic heritage and the effects his work has on today’s painters.”

Addison, who lives in Truro, created and is implementing “After Hopper” (copyright Addison Art, Inc. 2015). The Addison Art Gallery is the most active in the region and celebrates its 20th anniversary this year.

Quotes from Artists and the Cape Cod Museum of Art

According to Edith A. Tonelli, Ph.D., Director, Cape Cod Museum of Art, “It is exciting for us to partner with Helen Addison and the Addison Art Gallery. This project, which involves asking artists from all over the country to create new works of art inspired by Edward Hopper and the places he painted, is exactly in line with our mission to inspire artists and exhibit art that is connected to our region. These exhibitions and events are also intended to spark a dialogue about contemporary painting and its ties to historic and global artistic traditions.”

“With ‘After Hopper’, I am embracing Hopper’s influence. Without trying to recreate the same scenes, I am conscious of celebrating some of the subject matter, the look and pensive, mysterious, contemplative emotions of his work.” – Paul Schulenburg

“I admire the way Hopper took a scene and stripped it down to its essentials. The compositions are constructed with thoughtful precision. The color is used expressively. I’m especially enthralled with his work that includes figures. They fill the painting not with their scale, but their simple, perfectly placed presence.” – Marc Kundmann

“I have always admired Hopper’s ability to maintain a feeling of loneliness even though his work is flooded with beautiful light.” – Maryalice Eizenberg

“When I first started painting in the 1960s I thought to be a serious painter on had to paint simple geometric shapes like the artist Frank Stella, so I did too. But from Edward Hopper’s example I learned that one could be aware of avant-garde art but still choose subtlety nuanced realism as one’s way to express oneself.” – Philip Koch

“Bathed in the light of the outer Cape painting plein air it is impossible for me not to be inspired by Edward Hopper. My only hope is that I filter what he has so masterfully done and paint with my own voice” – Robert Abele

Opening reception for the first “After Hopper” exhibition featuring work created by award-winning artists and inspired by Edward Hopper and/or the places that inspired him.

Reception for “In Hopper’s Town” 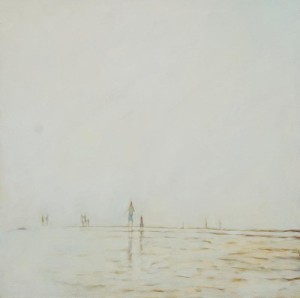 “Land and seascape paintings are, for me, about capturing a sense of place. The experience of solitude is the starting point; the sense of being alone and engulfed by the landscape is one I frequently seek out. I am especially drawn to places where the sea meets the sky in a such a way that you can’t tell where one ends and the other begins.

Recently I have been adding a figurative element to the landscapes that, paradoxically, continues to come from my own experience of solitude. I love watching the changing narrative as people come and go. They group together or walk alone, moving in and out of the landscape itself.” – Sharon McGauley

Reception, Saturday, June 27 from 5:00 to 7:00. Please click to see more new paintings to be featured in this show. 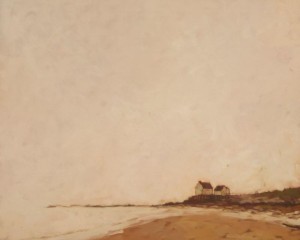 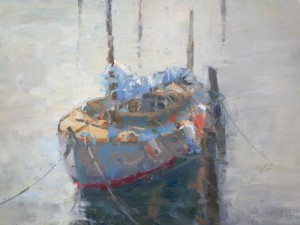 The Art of Wine Main Street Wine & Gourmet Join friends and sip something new at a casual reception in this charming village shop. 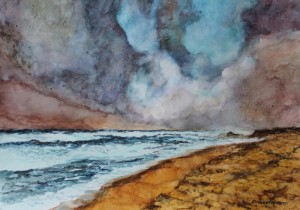 Memorial Day Weekend Open House Welcome the season with artists and friends in our gallery rooms full of new work. 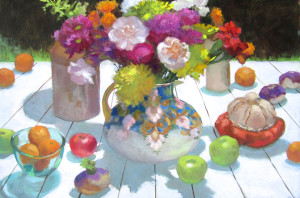 Sparkling moonlight on the bay, morning sun on fresh blooms, golden rays through a window, the glow of faces in a campfire. The skillful works of Eizenberg and McPhillips shown together – night and day, inside and out; a surprisingly distinctive range of approaches to light in art.

Painting East Orleans 8:00 to noon; Reception 5:00 to 7:00 Painting at various locations in East Orleans; Reception at Addison Art Gallery We hope you can join us for this special plein air event. Adults and children alike are enthralled by seeing a painting move from a sketch to a finished piece, and delighted to meet so many accomplished artists. Sponsored by the Addison Art Gallery and Nauset Farms. 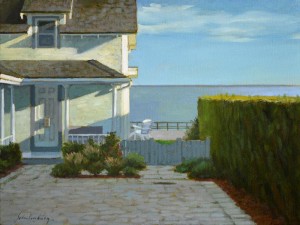 White House by the Harbor oil on canvas Paul Schulenburg 12 x 16, framed 18 x 22
For more information or to reserve work, please call 508.255.6200. Thank you. Wishing you all the best from all of us at Addison Art Gallery.
in Cape Cod News /by lduarte