Archive for category: News from the Tourism Office

Gay and Lesbian Tourism in Provincetown

Celebrating diversity and tolerance for 50 years 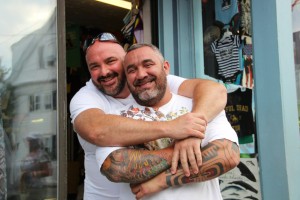 It seems only natural that Provincetown would be a draw for diverse visitors as the town itself boasts a long and diverse history, beginning with the arrival of the Pilgrims in 1620. The town began promoting itself as a tourist destination to boost the economy after the Great Portland Gale of 1898 wiped out the town’s fishing fleet and wharfs. Artists and bohemians were among Provincetown’s early visitors. They were attracted to the incredible natural beauty, eclectic population, and sense of acceptance found in the town at the outer most tip of Cape Cod. The 1920’s and 1930’s saw the gay & lesbian presence flourish as contingents of artists, writers, playwrights, poets, novelists, journalists, socialists, radicals and dilettantes began to summer in Provincetown. These newcomers found inspiration in this avant-garde town’s beauty and freedom of exploration. They were instrumental in developing Provincetown’s famous art colony and participated in the beginnings of modern American theater. It wasn’t long before Provincetown became the place to spend the summer months for gay men and women. Soon thereafter, many summer regulars became permanent residents as they purchased guesthouses and other local businesses, further enmeshing themselves in the local fabric. The 1970’s marked Provincetown’s rise as the gay and lesbian mecca and destination that it is widely considered today. Perhaps gay author Reed Woodhouse summed up Provincetown’s allure best when he wrote in 1991: “To such an extent that Provincetown is, for anything, known for us, known for being one of the two or three places on the continent where gay people can be seen in something like their native habitat. It is one of our hometowns.” Since gay marriage was legalized in Massachusetts in 2004, Provincetown has become “the place to get married” with over 1,400 marriage licenses issued to date. Couples chose Provincetown for its gay symbolism and the breath-taking backdrop of the town’s beaches.